Thirty-five men and women, ages 66 to 96, collect diplomas after an academic year of courses

Children, grandchildren and great-grandchildren of the graduates were among the guests present for the occasion. As part of the traditional graduation ceremony, addresses were delivered by class Valedictorian and US Army/Air Force veteran Irving Fuchs and Salutatorian and US Navy veteran Freddie Digiacomo.

Mr. Fuchs, 96, formerly of Queens, graduated from high school in 1937, but did not continue on to college due to family obligations. Instead, he took a job to help his parents, working in a millinery for 30 cents per hour. In 1942 Irving enlisted in the Army/Air Force, and flew 75 combat missions during World War II; he was awarded the Distinguished Flying Cross, the nation’s second highest award for military valor, for “heroism or extraordinary achievement while participating in an aerial flight.” Irving retired from a 40-year career with the US Postal Service and has lived at Gurwin since 2012.
Mr. Digiacomo, 88, formerly of Bayport, dropped out of high school to help his family’s bakery business when his two brothers left to fight in World War II. Freddie later joined the Navy, and never had a chance to complete his formal education. Now a resident at Gurwin, Freddie eagerly attends the Center’s Adult Education classes, which he says gave him the ability to keep his mind sharp and make new friends.

As part of the program, students completed one course per month from September to April. Taught by the Center’s Therapeutic Recreation staff, courses include “The History of New York,” “Understanding the Inventions that Changed the World,” and “Extreme Weather,” as well as programs in art and culture. Residents vote each September, choosing the curriculum from a list of topics; staff members research the topics to plan the coursework.

“Tonight’s commencement ceremony is a testament to the will and determination of a generation that values hard work, sacrifice and education,” said Herbert H. Friedman, CEO of Gurwin Jewish Nursing & Rehabilitation Center. “Their perseverance and commitment serves as a reminder to us all that learning is a lifelong journey; that personal and intellectual growth is achievable into the golden years. We are very proud of the accomplishments of our remarkable residents.”
On hand to congratulate the graduates and present certificates were Huntington Town Councilwomen Susan A. Berland and Tracey A. Edwards, and representatives from Senator John Flanagan’s and Assemblyman Chad Lupinacci’s offices. The ceremony closed with a “graduates’ cheer,” and the traditional tossing of caps. 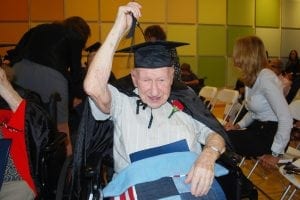 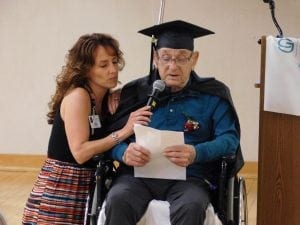 “I am writing to express my heartfelt appreciation to the staff of Gurwin for the loving care they gave my mother. Their commitment to excellence made an extremely difficult situation easier on myself and my family. I never worried about the care she was getting. The dedication, love and support the staff showed all of us is something I will never forget.”
-Madeline R.

When looking for an assisted living residence, Herb and Arlene Rosenberg would only consider a place that welcomed their dog as well. They moved to Gurwin’s assisted living in 2012, […]