Commack, NY— At just 17 years old, Adele Danon was determined to do her part to support her country during World War II.     U.S. hospitals, already facing a nursing shortage, were on the verge of collapse as doctors and nurses shipped out overseas to support combat operations.   The year was 1943 and President Franklin Delano Roosevelt had just signed into law the Bolton Act to recruit young women to train and serve as nurses stateside in the newly formed U.S. Nurse Cadet Corps.   Answering the call of duty, Adele enlisted in the Corps, kicking-off a 68-year career as a nurse.

As a U.S. Nurse Cadet Corps trainee, Adele and her fellow nurses-in-training pledged to actively serve in stateside hospitals for the duration of the war in exchange for an accelerated education and on-site training.  These unsung heroes were credited by The American Hospital Associate with having helped prevent the breakdown of the healthcare system during World War II.  In fact, Thomas Parran, Jr., the U.S. Surgeon General in 1945 stated, “We cannot measure what the loss to the country would have been if civilian nursing service had collapsed, any more than we could measure the cost of failure at the Normandy beachheads.” 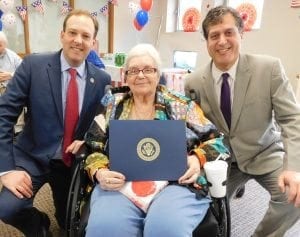 Despite this acknowledgement of their vital contributions, Nurse Cadets never received veteran’s benefits or recognition for their dedication and years of service. Nearly 70 years after first donning her Nurse Cadet uniform, Adele received a Congressional Proclamation from Congressman Lee Zeldin (NY), recognizing her service during WWII.  Surrounded by other veterans, staff and family at Gurwin Jewish Nursing & Rehabilitation Center where she currently resides,  Adele thanked the Congressman saying that the proclamation was not only for her but “for all of us who served in the Cadet Corps.”

Stuart Almer, Chief Operating Officer at Gurwin, who officiated the presentation ceremony, said, “Adele and her colleagues are among this country’s Greatest Generation whose extraordinary achievements on the home front made a significant impact to the war effort.     It was their dedication and commitment that helped to stabilize our nation’s healthcare system and provide quality of care for our stateside citizens.  We are pleased that Adele has been recognized for her wartime contributions with this proclamation from Congressman Zeldin and thank her for her service to our country.”

The employees make the difference

“In an era when so many businesses have been downsized, swallowed up, or closed, there is something to be said for the resilience and reputation of Gurwin. I believe the employees make the difference. We should always bear in mind that we each possess the capacity, even if only for a brief moment, to impact the lives of others. I will never forget the positive impression that the nursing staff at Gurwin had on my family.”
-Adriana W.